Flamingo Bowl is trying to start this league at 6:30 PM. I am writing this at 6:28 PM and there are 2 people here from 3 of the 6 teams. Some may sense mutiny in the air, but to us it is freedom. Freedom to wallow in the arbitrary nature of time. Freedom to immerse ourselves in the timeless expanse that is a game of bowling. The practice timer on our lane is now frozen at 18:11 remaining. Through bowling we have escaped the clock's maniacal grip. Through bowling we have escaped time's inexorable march towards death. Through bowling, we are free. 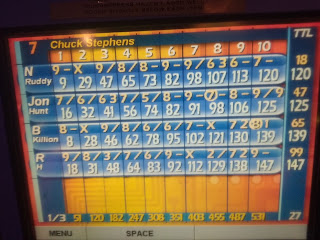 Our bowling order has changed this league. The passivity of "has changed" is the most accurate way to describe this, as nobody on our team asked for a change in order, nor even knew one would occur. This new order is momentarily disorienting, which itself is enough reason to move beyond it. It is just one moment in an infinite sea of moments. The rolling ball will shatter this moment, just as it has done to other moments since the dawn of time ('dawn of time' here = 'dawn of bowling'). In order to succeed we must focus on the moment, yes, but not get dragged down by the moment. Enjoy the moment for what it is - a fleeting message received by our various synapses which will fade away into a memory, at best. Be the stream, not the pebble.

This was a game of spares. Second chances. Opportunities to right the wrongs of our past and move forward not with the complete happiness of what should have been, but something close enough. Or is it close enough? Using second chances is important, but in life if we rely on them too much we may come up just a bit short. 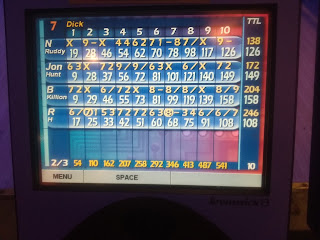 The sense of timelessness has become overwhelming, almost suffocating. A life of constant "nows" with no past to reflect on and no future to hope for. Just us and the lanes for infinity. This immediate "now" itself encompassing the billions of billions of possible realities. Would you like to see a pin swerve around other pins only to reflect back of the wall and knock them down? Would you like to see a 7-5-10 "split?" Would you like to see a pin slowly tilt 40° and then return, even slower, to its upright position? A thousand lifetimes in each individual moment. "I don't like this" - Richard, to me, as we individually navigate these expanding moments.

When I was a child I would frequently have dreams of events that would then happen in my waking life. None of them were particularly noteworthy (one that stands out is walking down the street and opening a bottle of RC Cola to discover that I had won a free soda -  one in six bottles were a winner, as the cap informed) but they did train me to accept situations as they are and not as how I think they should be; to be ready for a discrepancy from the dream. I mention this only because as I watched the pin tilt 40° on its side and then slowly return to its upright position, I realized that I had experienced this very same event in a dream a few weeks ago. I was already prepared to accept this loss and move along. Quantum physics will explain how the moment contained a multitude of possible outcomes, but the dreamstate had already selected. 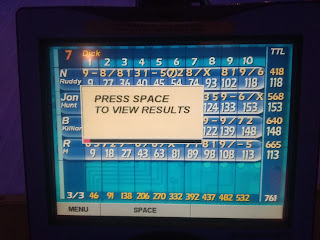 In Asako I & II (Netemo Sametomo in Japanese), Ryusuke Hamaguchi lets moments linger. Nothing is rushed, almost to the point of inertia. When the plot grudgingly moves along, it asks us to consider very difficult questions: Do people deserve second chances when they have hurt somebody they loved? If making mistakes is okay, then why can't we forgive mistakes in a romantic relationship? If we are hurt, why should we have to forgive? There are no answers in his movie, just choices. Whether they are the right choice or not is not important. The choice was made and now life moves along that path.

Hamaguchi's talent is in not even hinting at an answer to any of these questions. Just as the plot moves like a leaf sitting on a pond - sometimes moving this direction, sometimes moving another direction, but mainly just sitting still - trying to decipher "right" or "wrong" among the decisions made in this movie is not going to get you anywhere. They are decisions made by people, and that is all. Which is not to say that they cannot be judged, as we can see a million things that could have been done differently. The point is, they were not, and why should we dwell on that? On what could have been?

Is the third game of bowling a chance for renewal? Or is it better suited for regrouping? Focusing your efforts on improving techniques for next week's game? How far out of winning do you have to be to make this decision?

The third game of bowling is not a place for questions. We have spent the night attuning our bodies and minds to the immediacy of the lanes. Faltering now because of a dependence on spares, on second chances, is akin to throwing the entire evening in the trash. We made choices (made spares), and now we must live with them. A missed pin or a misstated phrase will hurt, but we must move ahead with this reality we have made. If we are given a second chance to strike the pin or say kind words, then we must take that chance. But we must be diligent to spot such chances, and this diligence requires a focusing on the "now." These are not replays of the past, but different moments, and must be treated as such.


"Do not pursue the past.
Do not lose yourself in the future.
The past no longer is.
The future has not yet come.
Looking deeply at life as it is
in the very here and now,
the practitioner dwells
in stability and freedom.
We must be diligent today.
To wait until tomorrow is too late.
Death comes unexpectedly.
How can we bargain with it?
The sage calls a person who knows
how to dwell in mindfulness
night and day
'One Who Knows
The Better Way To Live Alone.'"

- from the Bhaddekaratta Sutta. translated by Thich Nhat Hanh 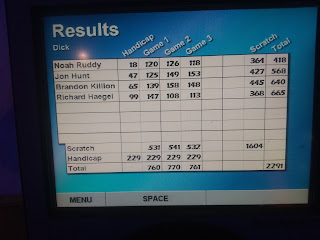