Under new direction, the lanes are excitedly oiled and the league is eager to resume. We've all changed and been changed over the past 2 years. Is this even the same league? Are some things so constant as to deny time's dogged progression? 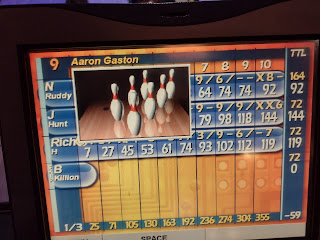 Stallings. Hauntings. During practice, the pinsetter unexpectedly lowered right after I released a ball, and these hauntings continued in to the game itself. Where does tradition turn into haunting, and is there even a good distinction between the two? The accumulation of unique  disturbances is all we have to distinguish us from one another, and so we give thanks and/or memories to those disturbances for allowing us to fall into a delusion of self. Therefore, "we" can't even exist without these pains and traumas. But who asked for that in the first place? 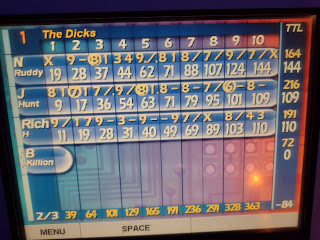 At some point, if you're going to be constrained by linear time, you should make a decision to leave "the past" in "the past." Experiences make you and may even better inform your present choices, but they are the past and if you're going to make any attempt to enjoy or learn in a present or future moment, then you must make a conscious and deliberate break with past events. Easier said than done, though. The past isn't gone, it's just past, and since it still exists it can still affect us and therefore render itself new again. And what better way to do that than to intentionally draw attention to the "past-ness" of it's present actions? And thus, the pinsetters break and break again. Splits and splits again. Frustrations lived before and lived again and lived. 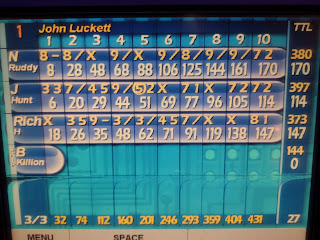 As with any endeavor involving time, endurance becomes an issue. Rhythms that had been turned into sick parodies of themselves were now allowed to regrow, as if one can recreate a "moment." Ample opportunity to "return to form," as if doing so were not a mockery of linear time itself. We have chosen this path "forward" because of the unknown and constant changes it brings. We'll return in death.